Nationwide demonstration in Berlin on the 1st of August 2021: “The year of freedom and peace“

Stuttgart/July 13th, 2021 On Sunday August 1st, 2021 the first mass demonstration of Querdenken 711 in Berlin in the year 2021 will take place. The Querdenken demonstrations are no anti-Corona-demos, but demos for the re-establishment of our fundamental rights, as we consider the government's measures from scientific and legal points of view as completely inadequate.

Precautionary measures wouldn't lead to a lot of collateral damage, to depression and suicide in otherwise healthy mental conditions. Middle class and smaller businesses and the retail sector are about to collapse; and at the same time the rapid increase of inflation is leading to an expropriation of pensioners and savers. The health system is cut down: Hospitals are closed down, the number of beds in intensive care units is reduced.

Mask deals by which politicians make a lot of money. #DIVIGate, the clear position of the STIKO, the proof of the absolute inefficiency of the measures by the statisticians of the LMU. TestGate in which in four weeks time 659 million tax revenues were wasted, defected masks worth 1,000 million euros that are to be destroyed. Anthony Fauci's emails that cast a different light on the truth.

From the very beginning of the pandemic the political rulers have created an arbitrary peace for themselves and a condition of permanent surveillance by a multitude of regulations and newly accorded powers to the police and border guards in order to further restrict human rights throughout Europe. Predatory capitalism has failed. People shall continuously separate themselves from each other and lose their jobs, shall work overtime, renounce salaries, and ruin their health. Children, adolescents and students don't have future prospects as schools and education have been cut back for fourteen months.

Who is making money on the crisis? 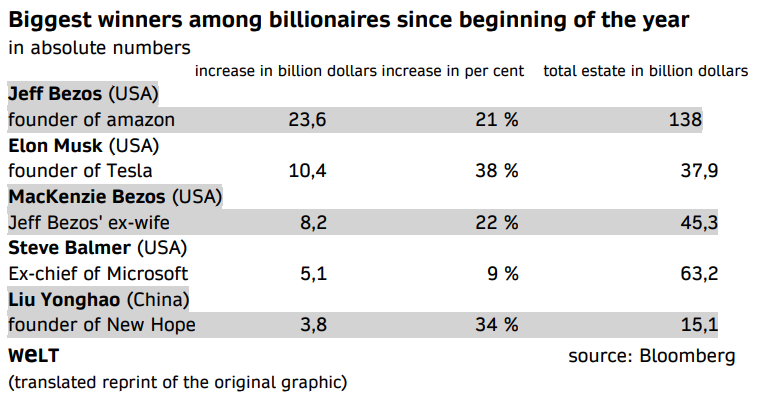 "A plus of 24 billion dollars – the biggest winners of the Corona crisis" https://archive.ph/A4uTU

The rulers are trying to tell us not to show our solidarity with each other, but – for fear of Covid - to close our eyes to what's happening: the greatest wealth redistribution from bottom to top and a wave of expropriation with a historical extent. We will not do so – we are many and we are more.

The end of the “Querdenkers“?

"What does the “ending“ of the pandemic mean for the Querdenken movement?"

The Octoberfest 2021 has been cancelled, and the European championship 2021 may only take place with 20 % of the spectators. We cannot detect an “ending“ of the measures. It's becoming clearer and clearer that participation in societal life without vaccination will soon be no longer possible.

Mixing up of demonstrations

The assembly of Querdenken 711 will take place, as on August 29th 2020 and August 1st 2020, in the Straße des 17. Juni in Berlin. We would like to emphasize this for there was some mix-up in the media reports on the demonstrations. It was impossible for the Tagesschau to differenciate between our mass demonstration on the one hand and the other 120 demonstrations on the other hand – one of which being the one in front of the Reichstag. Still-Senator of the Interior Geisel had tried to forbid our demonstration on August 29th 2020 for the following reasons:

and had called us “radicalized demonstrators“, “right-wing extremists“ and „Reichsbürger“ (citizens of the Third Empire).

Dis-empowerment of the parliaments

Regulations do not constitute suitable statutory bases. They contravene parliamentary reservation through administrative channels, exceed the creative leeway of the executive power, and thus violate the principle of contents, purpose and extent (“Bestimmtheitsgrundsatz“): By the many changes of the Corona regulations issued in quick succession, a reliable and stable regulatory framework is no longer given for the citizens.

Societal life is restricted in sensitive areas of fundamental rights for an unforeseeable duration, which requires a formal process of parliamentary legislation. This parliamentary reservation deduced from the principle of the due course of law and the dictate of democracy obliges the legislative power to pass essentially by itself the regulations which are significant for the realisation of the fundamental rights, and to not leave these to the executive authority's acting with the power to decide.

Constitutional law expert Andrea Edenharter comments on that: “The committee by which the far-reaching measures are decided is very problematic relating to constitutional law because the conference of the minister-presidents and the chancellor is not provided for as an organ by the Basic Law. The principle of the due course of law demands that all essential decisions be made by the parliament itself.”

We therefore would like to ask you to report in future on our demonstrations as “demonstrations for the re-establishment of all fundamental rights as well as for the observing of the Human Rights Convention.” 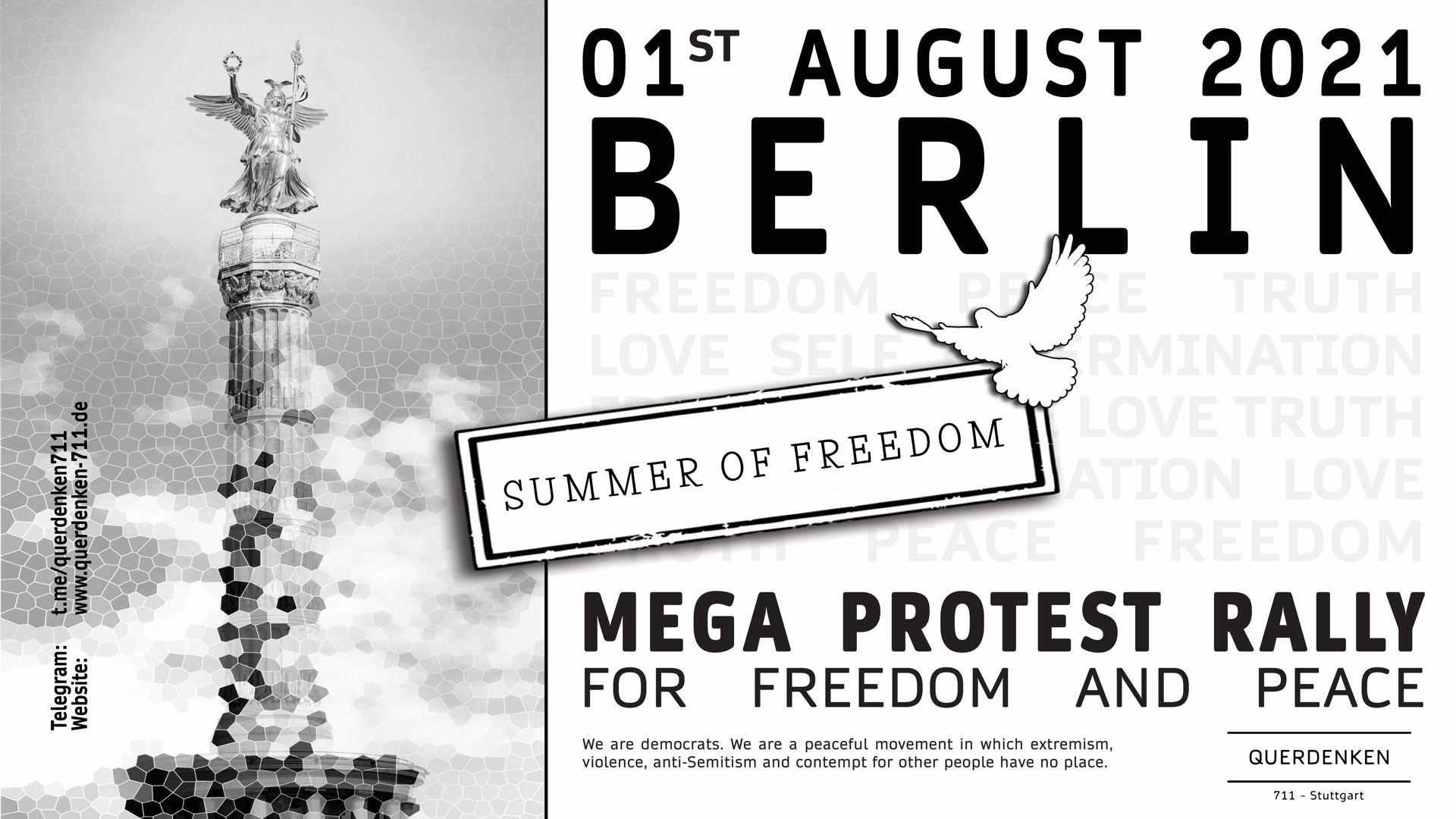 Our manifest – Basic Rights are not negotiable

We insist on the first 20 articles of our constitution, particularly on the annulment of the restrictions by the Corona regulations on:

We are democrats. We are a peaceful movement in which there is no room for extremism, violence, anti-semitism, nor inhuman philosophy. The idea and the ideals Querdenken are: We talk to all people who act peacefully and free of violence, no matter what they are called by others. We open up a free and democratic room for debate. We stand for peace, liberty, democracy, and rule of law. Such is the room for debate in the context of which we act.

Another demonstration is planned for the 29th of August. For the time from the 2nd of August to the 28th of August many of the more than 70 Querdenken-initiatives have announced demonstrations in the Straße des 17. Juni.

We hereby invite all journalists to undergo accreditation for this area. Please respect the fact that the press area is limited and that hygiene and distance rules are to be observed. We are assigning places according to the principle of first-come/first-serve. Accreditations will only be taken into account if handed in via our online-form.

Please use the following form:
https://survey.typeform.com/to/LoudJrpP

YouTubers & bloggers are most warmly welcomed so as to report on our demos and conduct interviews with the speakers. We assign the places according to the principle of first-come/first-serve.

Accreditations will only be taken into account if handed in via our online-form.

Please use the following form:
https://survey.typeform.com/to/CymJxfwN